Olympic weightlifters compete in two lifts, the snatch and the clean and jerk. In both lifts the lifter begins by pulling the weighted barbell from the floor to an overhead position. A study was done with an Olympic athlete using Polhemus technology. 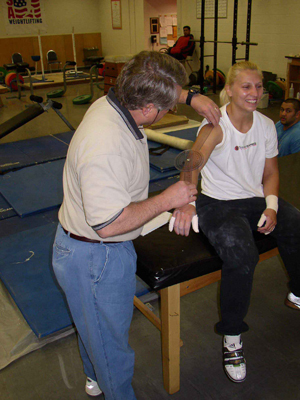 Weightlifters compete in two lifts, the snatch and the clean and jerk. In both lifts the lifter begins by pulling the weighted barbell from the floor to an overhead position. The snatch lift is performed in one continuous movement while the clean and jerk has the athlete pull the bar to a shoulder position and then the athlete "jerks" or pushes the bar overhead to complete the lift.

Jackie Berube is an elite weightlifter training at the Olympic Training Center in Colorado Springs. Jackie has the distinction of being one of the strongest athletes, pound-for-pound, male or female we have ever tested at the Training Center. Jackie is an outstanding athlete having been a collegiate gymnast and women's wrestling world medalist. Jackie also excels at weightlifting; however she has an anatomical limitation in that her elbows will not completely extend due to bony restrictions in her elbow joints (Figure 2. Measuring Jackie Berube's elbow range of motion). 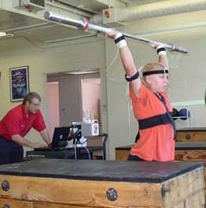 This places her at a significant disadvantage in the overhead portions of her lifts. She faces the paradoxical problem of being strong enough to get a heavy weight overhead, but unable to "lock" her elbows and thus hold the weight there for the necessary time to achieve a completed lift.

We are using Polhemus hardware and Advanced Motion Measurement software to help Jackie learn to maintain tension in her triceps and thus hold the weight aloft in spite of her elbow anatomy (Figure 2. Jackie holding the bar overhead while instrumented).

The high sampling rate of the Polhemus LIBERTY (240Hz) allows Jackie and her coaches to see her movement with the clarity that slow motion provides.

The Polhemus and Advanced Motion Measurement system allow us to monitor her lifts in real time and thus provide her with nearly instantaneous feedback regarding her body position and elbow movements.

We have worked with her to establish a wider grip and more awareness of her arm and elbow movements. The tracking system permits Jackie to perform each lift with immediate feedback on how she did, and then see her body position changes immediately after each lift on a laptop computer. 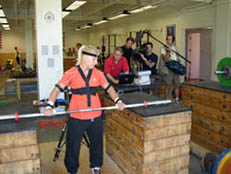 The coaches have been staggered by the system's ability to render a lifter in a "robot" shape that makes the image more recognizable and easy to analyze using a trained coach's eye.

Jackie's awareness of her arm positions, the tension required to support the weight, and the speed with which she must attain and maintain tension in her triceps has improved markedly and we are monitoring her development every few weeks.

The high sampling rate of the Polhemus LIBERTY (240Hz) allows Jackie and her coaches to see her movement with the clarity that slow motion provides.The Sport Sciences Division of the USOC is also developing this same technology to help pistol shooters track their arm, hand, and gun motions.