Tru-Test Ltd is a multinational company that designs, develops, manufactures and markets agritech and electrophysiological solutions. Tru-Test required 3D data of peri-natal infants to aid in the design of a specific electrode array for premature infants, to be used with a new type of EEG monitoring device.

This required Tru-Test to use a computer model in order to determine the size and geometry of the electrode to fit the shape and curvature of the heads. The need for accurate data was paramount. However, suitable 3D data was not available.

The solution was found with the Polhemus FastSCAN™, a handheld 3D laser scanner, which was used for scanning two anatomically correct, premature baby dolls. FastSCAN's FastRBF Extensions™, was used to create a model for exporting to SolidWorks.

The head and shoulder areas of the two dolls were scanned using the FastSCAN (Figures 2a and 3a). The FastRBF Extentions automatically fits a surface to the original data points to guarantee that the output mesh is free from holes and watertight (Figures 2b and 3b). The FastRBF surface is also guaranteed to pass within a specified tolerance (in this case 0.1mm) of the original surface points. Furthermore, it has smoothing capabilities that can remove noise from the data. This proved invaluable when scanning the fetal doll. 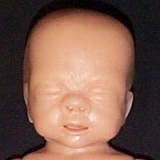 The doll's surface was a semi-opaque silicon rubber (Figure 1), that gave a very poorly defined (noisy) surface as viewed by the laser scanner (Figure 2a). Powdering or painting the surface would have solved the problem, but it became apparent during processing with the FastRBF Extensions that this was not required. The smoothing feature ensured that the noise was removed but the detail of the original surface was retained (Figure 2b).

As a CAD package, in this case SolidWorks, was the target program for the output model, it was important to reduce the facet count to a manageable size. The FastRBF Extensions simplification reduced the polygon count for the fetal doll from approximately 169,000 facets to 23,000 facets (a reduction of 86%), and for the newborn doll, from approximately 97,000 to 17,000 (a reduction of 82%).

A close-up of one of the dolls before and after simplification is shown in Figure 4. To achieve this, an accuracy parameter of 0.05mm was used, so that the simplified mesh would be no further than 0.05mm from the non-simplified surface. 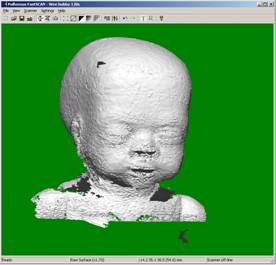 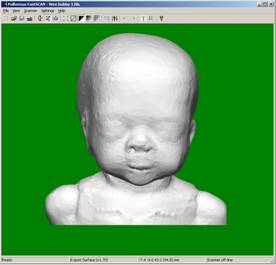 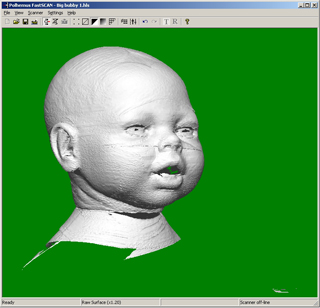 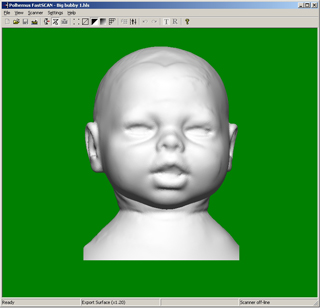 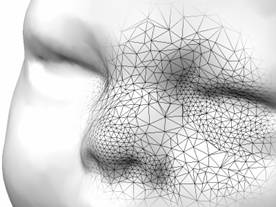 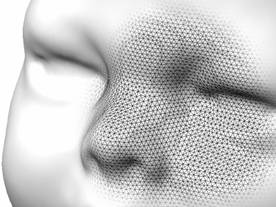 Figure 4: The newborn doll before and after FastRBF simplification: the fine mesh and the simplified mesh 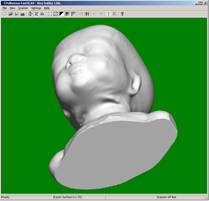 Figure 5 shows the closed surface which was then exported as IGES 128 (NURBs) entities, which is one of the many industry standard formats that FastSCAN supports.

In order to compare the ability of SolidWorks to import these surfaces, the fetal doll model was exported as a closed surface, i.e. with closed planes at the bounding box (Figure 5), and the newborn doll was exported as an open surface, ie the model was not closed at the shoulders and base.

A product engineer from Tru-Test was given the task of importing and manipulating the objects in SolidWorks. For the (closed) fetal model, importing took approximately three minutes, resulting in an "imported solid" (as seen in the feature manager tree). The product engineer was able to start working on the model immediately.

With the open newborn model, the task of creating a solid model involved a few more steps before SolidWorks would recognize the model as a solid. Briefly, these included:

The resulting models as exported into SolidWorks are shown in Figure 6. 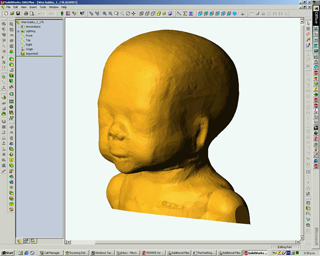 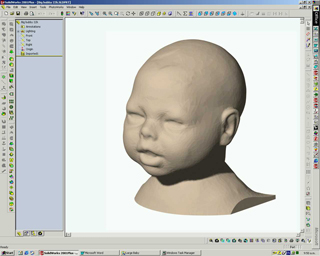 Figure 6: Screen captures of the two models in SolidWorks

According to the Product Engineer, with the help of FastSCAN, "The project was very satisfying and very successful."

The mathematical consistency of the post-processed data guaranteed by the FastSCAN FastRBF Extensions was critical in creating models that could be loaded and manipulated in SolidWorks. The following table summarizes the steps involved (times for the fetal model). 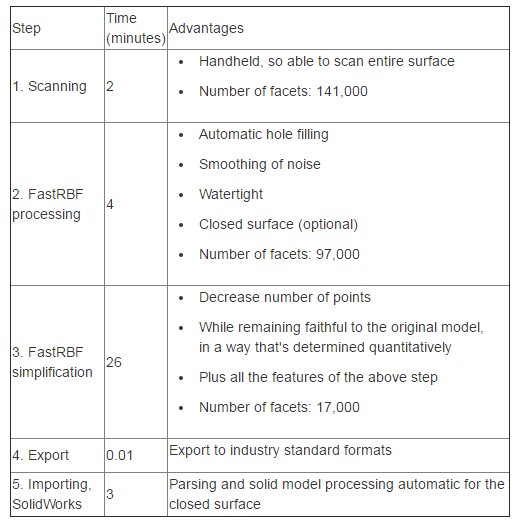 "A great advantage of the PATRIOT tracking system used in SEP (SimSurgery Educational Platform is a customer product) is that it measures the position and orientation of the free instruments without having the instruments anchored in a mechanical measurement system. This feature makes the simulator user interface very flexible and allows the user to freely select an instrument port. As a consequence, the system can be used to simulate scenarios with any port configurations, including single incision laparoscopic surgery."