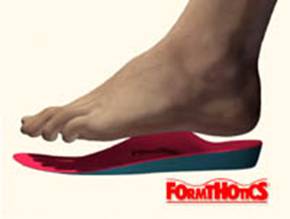 The project required a high degree of anatomical accuracy and would have been a very laborious modeling exercise had it not been for the handheld laser scanner.

Although the scanner had some trouble in the crevices of the toe area, it produced a level of detail throughout the rest of the foot that was simply amazing. Veins, tendons and bones all came through extremely well. The image reflects the scan of the foot. 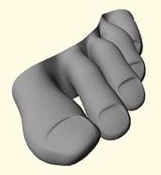 The scan had around 52000 polys (this was reduced from the much higher resolution original scan), but this was still too large for Montage's needs and a little unwieldy for additional modeling. Montage used polygon reduction software to take the polys down to around 15000

Using the scan as a guide, a set of new toes was generated for the foot using Lightwave's MetaNurbs feature. After removing the toes from the scan, a bridge was then made between the new toes and the rest of the foot using the Skin command.

The scanner gave Montage an excellent representation of one of a staff member's feet in a scan that took only seconds. The setup time and experimentation was minimal.

Despite initial concerns about the modeling, texturing was easily the most time-consuming part of the project, requiring maps on all three axes, seamlessly blended together. 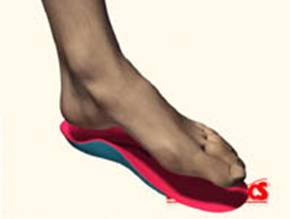 The final animation was well received by the client and was used as part of an interactive kiosk at an international tradeshow in Germany and also featured in a TV commercial.

The image represents a frame from the 30-second animation.