Jim Turner, owner and founder of Honeoye Falls Millwork was approached to be a part of the restoration and replication of an 18th Century Pipe Organ known as the Craighead-Saunders organ project. This historic organ had been declared a national treasure and no original parts are permitted to leave Lithuania. The Polhemus FastSCAN was instrumental in this complex project. 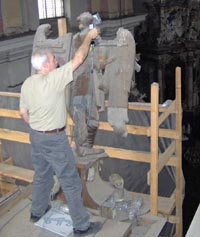 Jim was challenged by the fact that he needed 3D models of the pieces that made up the organ, to then bring back to the US in order to replicate the original.

Realizing he needed a 3D scanner Jim evaluated many, and chose FastSCAN™ for multiple reasons including portability, ease-of-use, quality of scans and most impressive to Jim, the auto stitching functionality.

Some pieces were not allowed to be moved, and in some instances touched, it was crucial to have a portable scanner that was easy to set-up. Jim had to reach pieces where no other scanner could have been setup. FastSCAN’s handheld wand easily moved around, above and below the large and irregular pieces as needed to capture a complete scan.

While scanning the life-sized angel, as seen in the photo above, Jim explains, “I was set up on a platform scanning the life size angel and the entire platform was moving with every step, but with the transmitter strapped to the angel, the scans came out fine”.

Other pieces were moved to a scanning station which was a ping pong table in the back area of the church, dirt floor, and no lights except a large window. Jim was able to scan about 66 pieces in 4 days.

Portability was essential: “FastSCAN was the only scanner that was portable and robust enough to be set-up on a piece of scaffolding for me to scan this life size angel free-hand." – Jim Turner 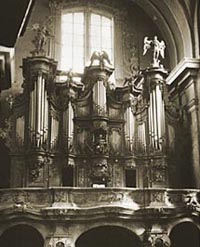 The organ is made up of "pipe shades", ornately carved baffles that go at the top and bottom of a set of pipes, restricting the airflow and modifying the sound of the organ. The photo is an example of the pipe shades Jim was tasked in replicating. This pipe shade measures 74" long and 34" wide.

Jim scanned the pipe shades which created a 3D model within the FastSCAN software exported the file from FastSCAN to his CAD/CAM software to create a toolpath he then sent the toolpath file to his milling machine for carving.

Total carving time was about 23 hours: 11.5 hours for the roughing cut, 1.5 hours for preliminary finishing, and 10 hours for final cut. Both the front and back of these parts were carved to match the originals.

“I could not have done this project without FastSCAN. The parts came out exactly like the originals, and I was able to stay within the customer’s budget.” Jim Turner

"You have world-class dexterity from the human-like, five-fingered, robot hand and you can track user fingertip positions and orientations with no line-of-sight required, using the conveniently small and mighty Polhemus sensors."