Ralph Helmick and Stuart Schechter are sculptors with a shared interest in the mechanics of visual perception. In 1994, Helmick and Schechter incorporated and opened Helmick + Schechter Sculpture (H+S) in Newton, Massachusetts. As highly respected artists, they are known for their massive hand sculpted collages located in malls, sports facilities, and businesses throughout the country.

Each collage contains numerous smaller carved objects used to form a larger sculpted figure. Since the artists began collaboration of their work, they have developed a range of experimental approaches linked more by underlying esthetic principals than a signature style. 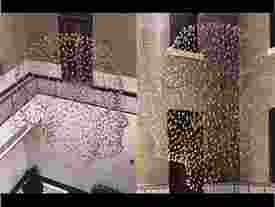 As H+S gained recognition, it became apparent they needed to reduce the amount of time it took to create each sculpture. Using traditional creative processes involve making molds of subjects by hand and casting them in a malleable material. Once the object is cast and then dried, the artists begin sculpting. After the artists sculpt the objects, they create a second mold and cast that is used to build the final sculpture. This process is very time consuming, especially when used to create a sculpture made up of multiple objects.

H+S determined that reducing the rapid prototyping process was the most efficient way to decrease time spent to make each sculpture. This would allow them to accommodate the number of projects they were being commissioned to sculpt. However, H+S also needed to find a solution that did not compromise their artistic integrity.

After extensive research into digitizing products, H+S determined they could hasten the mold making process to accomplish their goal. A faster mold making process would involve digitizing their subjects with some type of scanner. They found various 3D digitizing systems in the marketplace but quickly learned that most of the scanners were expensive and cumbersome. In addition, many of the larger stationary scanners required the use of a turnstile, which limited the size of the objects that could be scanned. Turntable units were also not practical.

H+S eventually dismissed these competitive products, and ultimately selected the Polhemus FastSCAN, a lightweight, reasonably priced and portable handheld 3D-laser scanner. "We couldn't use a scanner with a tabletop turntable because it limited the objects that we could scan. We needed a scanner that was portable and could scan the surface area of both large and small objects," Helmick said. "FastSCAN allowed us to quickly and easily scan objects on location or in our studio with a high degree of accuracy."

What set the Polhemus scanner apart was its ability to scan objects and provide a full 360 degree digital representation of the surface area with sufficient detail.

Schechter commented, "FastSCAN can export the data representation of the scan in almost any file format." Schechter continued, "The ability for us to bring FastSCAN on location was also a big plus. FastSCAN can be hand carried virtually anywhere, and can scan objects of all sizes in minutes."

With the Polhemus FastSCAN, the artists are able to quickly create realistic and accurate digital representations of the objects that they sculpt. Schechter noted, "The key to this modern technique of digitizing our subjects is its ability to capture enough detail that we take and enhance, giving each object our own sculpted signature; this can't be achieved with computer generated art." Helmick continued, "This allows us to add our artistic vision and distills the important elements that only come from the eye and hand of an artist."

"Using digital scanning has tremendously simplified our creative process. Before FastSCAN we had to manually form each mold, which is a long and tedious process. Now we have the initial casting in our hands in a matter of days. The old method took weeks for the mold to be created and cast." Stuart Schechter.

With FastSCAN, H&S is able to create sculptures much faster by significantly speeding up the rapid prototyping process. It also has enabled them to use modern technology which shortens the creative process without compromising H+S's style and vision. According to Helmick, "Computer generated artwork does not allow an artist to put their true artistic signature on it. However, with FastSCAN we can create digital art that we handcraft. This is what makes our artwork so unique: it has a modern, yet hand sculpted look to it."

"The FastSCAN is a vital tool for us. It has allowed us to create many more sculptures than ever before, enabling us to significantly grow our business in a short period of time," said Schechter. "We also have been very pleased with the level of technical support Polhemus has provided. They have kept in touch, showing continued interest in our business and the performance of FastSCAN." Schechter continued, "Polhemus is good at sharing new technologies and product upgrades that we will continue to utilize."