Joint position sense (JPS) is a component of proprioception and is described as the individual's ability to know where his/her body parts are located in relation to each other (Lephart & Fu, 2001). This information is important for a number of practical reasons.

First, athletes and others regularly stretch as a part of their warm up and as a preventative of injury. However, if the athlete's ability to locate his/her limbs in space is compromised by stretching, then the injury prevention aspect of stretching may be questionable and stretching may be contraindicated for injury prevention. Second, in terms of performance enhancement, if stretching interferes with position sense, then those skills requiring exquisitely precise technique should not be preceded by stretching.

In order to measure one's ability to locate a limb in three-dimensional space one requires sophisticated laboratory instrumentation that is precise, robust, reliable, and easy to use. "We found that the Polhemus LIBERTY system of magnetic tracking sensors was a perfect choice.

This system provides extraordinary precision and ease of use," states Bill Sands. Advanced Motion Measurement, LLC (AMM) software was used in conjunction with the Polhemus hardware in order to render data for analysis in six degrees of freedom. This kind of motion analysis is easy to obtain with the Polhemus and AMM systems. Other biomechanical analysis systems require considerable post processing and analyze rotational motions of limbs only with great difficulty. In our study, rotational information was paramount to understanding proprioception following stretching. 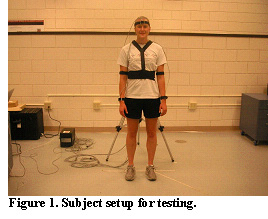 The study was conducted using 21 adults, recreationally active subjects (11 male, 10 female). The study sought to determine if a subject's ability to reposition their arm in space while blindfolded differed following an acute bout of static stretching to the shoulder musculature. While traditional goniometric tools could be used to evaluate changes in joint angle, the error of measurement was considered unacceptable for the purposes of this study.

Subjects were outfitted with the Polhemus magnetic sensors. Sensors were placed on the torso (C7), upper arm, wrist, and forehead using Velcro straps (Figure 1). Anatomical landmarks were then digitized with a magnetic sensor fixed to a pen (Figure 2), so that positions could be scaled to each individual's anatomical lengths, and a robotic model of the body could be created.

"The Polhemus LIBERTY magnetic tracking system suited our unique research needs precisely. The data collection rate of 240 Hz and the precision of the data obtained were important for our study," says Bill Sands.

Subjects were seated in a chair and blindfolded using obstructed-vision swimming goggles. The seated position was used to help limit variation in trunk position while moving the arm during testing. The arm of each subject was passively placed by the principal investigator in three positions: a low position of approximately 50 degrees in the sagittal plane (Figure 3), an oblique position of approximately 110 degrees sagittal and 30 degrees of 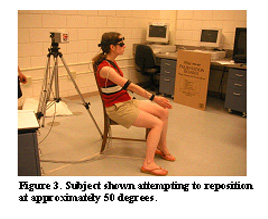 horizontal abduction, and a high position of approximately 150 degrees sagittal. The initial angles were determined goniometrically, and each individual subject's 3D coordinates were recorded in real-time to determine exact coordinate locations with the Polhemus and AMM system. The subject's arm was placed in each position three times, and each time the subject was asked to hold this position for three seconds and to remember the location so that it could be reproduced by the subject during testing.

Figure 4 shows a model drawn by the Polhemus and AMM system generated using a subject's data from the maximal passive ROM test. Data were sampled for approximately one second following verbal indication by the subject that they were at their maximal flexed position. This test was conducted as a pretest to determine if the stretching protocol actually induced a temporary increase in range of motion, and to ensure that each subject fell within published normative values for shoulder range of motion. Following range of motion testing, the subjects were statically stretched by the principle investigator in four positions (horizontal hyper-adduction, flexion, hyperextension, and horizontal hyper-abduction), with each position held for 30 seconds.

Immediately following the stretching protocol, the subject's arms were again passively placed in each of the three pre-testing positions (one repetition only) in order to remind the subjects of the required positions to be tested. Then post testing of JPS was conducted, followed by the maximal flexed range of motion test to assess the effectiveness of the stretching protocol. 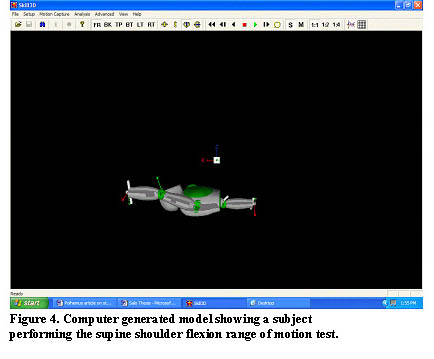 Initial investigation of the data showed excellent repeatability for the maximal flexed range of motion positions, with variations in repeated trials often less than one cm (3D coordinate position of the wrist compared to the torso sensor). Data analysis will involve the determination of an absolute angle of the arm in each of the positions of interest. If appropriate, mean JPS will be calculated and compared pre to post. In addition, the variability in repeated trials of JPS may prove to be interesting, as static stretching may lead to a greater variation in JPS.

"In summary, while other more traditional biomechanical equipment could have been used to solve the research question of this study, the Polhemus and AMM system demonstrated a level of sophistication and precision that made this type of study possible and in many ways easy," states Bill Sands.