Building on the success of United Kingdom-based Virtalis' Reality Helicopter Voice Marshalling Trainer, upgrades for which were delivered to the Royal Air Force (RAF) in 2007, the company has now developed a portable variant of the training system which features the Polhemus LIBERTY LATUS tracking system. The Helicopter Crew Reality System Portable trainer is aimed at helicopter rearcrew undertaking tasks such as operating with underslung loads, SAR and general operations in difficult terrain which require input from crew in the rear of the aircraft. 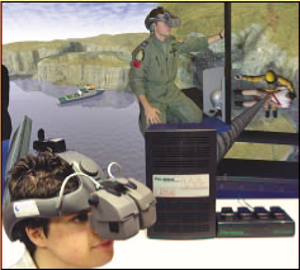 Andrew Connell, Virtalis Technical Director, explained that, "by using a low cost, standard PC, which works from a single graphics card, we have created an off the shelf product which takes only ten minutes to set up. We have been able to harness developments in computing power so it offers advances in graphics quality, performance and user interfaces. The rest of the system consists of a head-mounted display, a tracking system, two LCD panels and a joystick.

Like our RAF system, it features three marshalling environments: sea, land and coastline, though in recognition of the variety of helicopters in use around the world, it can feature different models. It is simple to customize, so that new local terrain can be easily generated. Tailored systems for different helicopters and/or familiar landscapes will cost a bit more than the standard model."

The skills performed by rear aircrew play a vital role in both search and rescue missions and in the delivery of military and survival resources to remote areas.

Located in the rear cabin of a helicopter, harnessed aircrew monitor the landscape through the open cabin door and verbally relay flight commands to the pilot in order to guarantee an accurate and safe approach to the helicopter's landing site or target object.

Two bases responsible for the helicopter training within the RAF, the Central Flying School (Helicopters) and Defence Helicopter Flying School at RAF Shawbury and the Search and Rescue Training Unit at RAF Valley are currently operating the original system.

Like its predecessor, the new system utilizes Virtalis' real-time rendering engine, kRender. This allows the student to see a seascape animated right to the horizon. Such details are important because aircrew are trained to use surface physical details to help gauge distance for the pilot.