The Polhemus FASTRAK® system was used as a digitizer for studies conducted in China to study agriculture, specifically the study of plant growth under different climate and soil conditions. 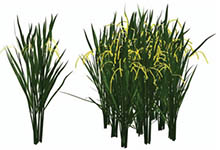 Xiping Wang, from the College of Resources and Environmental Sciences in Shijiazhuang, China, used FASTRAK® in a study to estimate the photosynthetic active reactions in corn. Wang used a 3D model of the corn to measure the above-ground architecture of the plants with coordinates of points on the leaves and cobs using the FASTRAK® as a digitizer. With this information, Wang’s team was able to create a highly detailed 3D digital model of the corn stalks, along with different intensity levels of sunlight that came in contact with each leaf. 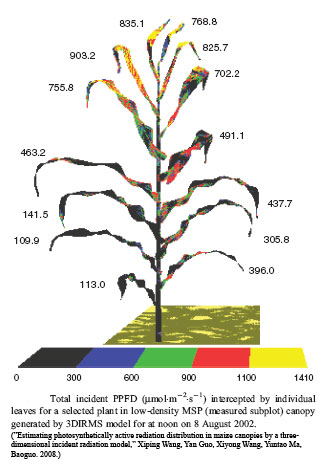 The study concluded that planting the corn closer together had an effect on the height of the corn’s growth and the size of the leaves, resulting in taller plants with smaller leaves.

The test data allowed Wang and his team to create a simulated model which is able to show similar results given the estimated density of the planted corn.

A study of hybrid rice using a spatial light model based on 3D digitizing, by Bangyou Zheng, from the College of Resources and Environment, China Agricultural University in Beijing, China, used FASTRAK® as a digitizer. Zheng’s team collected strategic points on the rice plant along with the topological information of the study area.

The team used nine plants at various stages of growth, digitizing and measuring four to ten points on each stem. The distance between points was no more than 1 cm. Two people digitizing nine plants took less than ten hours to complete the measurements at each stage of growth.

Zheng’s study concluded that the “3D digitizing technology can be used to quantify rice architecture in a paddy field.”

The study showed that the rice plants with steeper leaf angles allowed light to easily penetrate the plant more deeply. This significantly enhanced the photosynthesis at the lower portion of the plant during a higher angle of the sun, and resulted in a more uniform light distribution within a densely planted rice field.