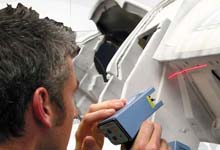 As published in Time Compression Technologies, FastSCAN streamlines the reverse engineering process for vehicle conversion from left hand to right hand drive for Bunce Motor Company. A typical conversion can take up to eight months, but with their newly acquired hardware and software knowledge, MWDesign anticipates bringing the entire conversion process down to one working week.

MWDesign was selected to provide a 3D model digital scan and reverse engineer all internal components of a Corvette, including changing the windshield wiper direction from right/left to left/right. The reverse engineering module "REX" (Reverse Engineering Extensions) from Pro/Engineer® was used to import and process the scan data. After stripping the vehicle down to its essential components for the conversion, the dash console and the center console were ready to be scanned.

Technical expertise for the scanning process was supplied by ARANZ Scanning Limited. All metal components from the dash were removed and the dash was sprayed with a contrast-enhancing agent to give the black dash a more scanable surface. ARANZ scanned the whole dash at a resolution of around 0.5 mm. Post processing with FastSCAN created a high-resolution water-tight STL file for importing into Pro/Engineer.

At the resolution used, the grain in the leather upholstery was clearly visible in the raw data. Although FastSCAN can calculate finer data points, the size of the resulting file for such a large component was the limiting factor.

The STL file was imported into Pro/Engineer and using features available in their reverse engineering extensions module "REX" a parametric model was created and saved as a Pro/Engineer file. The data was then split into two parts: upholstery and structural. As the upholstery surfaces were organic in nature, they needed to be offset by 3.5 mm to allow for foam padding and upholstering of the new dash. The structural part was constructed from a morph of flat planes and simple surfaced forms, requiring a high degree of accuracy as a number of other components are located within the dash structure.

The two-part assembly was finally re-combined to form a third completed model part. While maintaining integrity and stability, the file size of this model was able to be reduced by over 30% using Pro/Engineer's "Publish Geometry" command.

The two methods of surfacing resulted in a clean and robust model that allowed manipulation of the non-symmetric features such as heads up display, gauge console mounting and the Corvette logo over the passenger air bag.

The re-combined dash surface files were exported to a five axis CNC router. The dashboard was machined in high density closed cell foam 1.5 mm undersize to allow the patternmakers at Bunce Motor Company to build up the surface with 2 layers of fiberglass allowing a better finished surface from which to form the master molds.

The total conversion time was reduced to four months by utilizing the FastSCAN system and the other techniques described. MWDesign anticipates bringing the entire conversion process down to one working week.

With an established process in place, and their newly acquired hardware and software knowledge, MWDesign is preparing to develop interior conversions for a Dodge pick-up and a Hummer.

ARANZ Scanning Ltd is a wholly owned subsidiary of ARANZ (Applied Research Associates NZ Ltd) which was formed in 1995 specifically to develop and commercialize the patented technology used in its very successful hand-held laser scanner. The scanner now known as the Polhemus FastSCAN has found application in animation and graphics, prosthetics and orthotics, forensics, medicine, archaeology, bio-sciences, and reverse-engineering. www.aranz.com

MWDesign specializes in product design, managing the project from concept to production. MWDesign works for private clients, yet fits seamlessly into other design teams and companies to provide everything from ideas to construction of 3D computer models for tooling and production. www.mwdesign.co.nz

Bunce Motor Company specializes in the importation and selling of Chevrolet/GMC vehicles and spare parts from North America, converting these vehicles to right hand drive for the New Zealand and Australian markets, the manufacture of right hand drive components, and vehicle sales and service. www.bunce.co.nz