Dr. Erik Murchie, Lecturer in Crop Physiology, Division of Plant and Crop Sciences at The University of Nottingham in the United Kingdom explained, “It’s all about analyzing the ratio of light intercepted or ‘captured’ by the crop to the amount of biomass produced. In order to do this, we’ve got to study the architecture of the rice and wheat canopies at quite a fine scale. For example, if we can open up their canopy, we’ll get more light to the plant tissues and optimize its photosynthesis. With their complex, curved leaves, these plants have proved very difficult to measure over large areas."

"We’ve been successful using FastSCAN in the lab and are now deploying it in field trials in Mexico." Dr. Erik Murchie

The FastSCAN acquires 3D surface images when the handheld laser scanning wand is swept over an object, in a motion similar to spray painting. FastSCAN works by projecting a fan of laser light on the object while the camera views the laser to record cross-sectional depth profiles.

FastSCAN has an embedded Polhemus FASTRAK® unit, which determines position and orientation, enabling the computer to reconstruct the full three-dimensional surface of the object. Its non-contact methodology is important when dealing with humans, animals and plants as well as valuable or fragile objects. 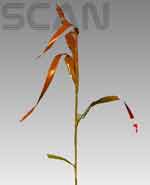 Qingfeng Song, a PhD student in Plant Systems Biology at Shanghai Institutes for Biological Sciences in China, has just returned from Mexico where he sought to measure photosynthesis rates in different varieties of wheat by taking slices through the plants’ canopies.

According to Song, FastSCAN had never been used for this kind of application before and so they had to experiment with the best way to use it out in the field.

"By working in low light levels at dusk and without destroying the plants, I was able to capture data over a large area for the team to study. Such data are required for the development and validation of a realistic 3D canopy photosynthesis model," said Song.

This case study published with Permission and Courtesy of VIRTALIS

"We found that the Polhemus LIBERTY system of magnetic tracking sensors was a perfect choice. This system provides extraordinary precision and ease of use."