The purpose of this study was to provide some preliminary information on the vault board. These initial results are part of a much larger ongoing study of the behaviors of gymnastics apparatuses. The Polhemus LIBERTY was used for the precision motion measurement that was necessary.

The vault board is used for vaulting take-offs, drills and skills for tumbling and vaulting, and other apparatus mounts. It has undergone a limited amount of scrutiny with regard to its behavior. However, the interaction of the vault board with gymnasts has scarcely been addressed. The following information is largely descriptive and meant to portray vault board movement behaviors during vaulting take-offs and our current preliminary efforts at studying the vault board.

Vault board behavior was analyzed by two primary means: high-speed video and magnetic motion tracking. Video analyses of vault board behavior were undertaken using high-speed video (NAC HSV 400) at 200 frames per second. Four reflective markers were placed on the board as shown in Figure 1. The reflective markers were video taped and then rendered to x-y coordinates (two-dimensional analyses) via Peak Performance Technologies software.

The raw data were analyzed for position, displacement, and velocity information. Figure 1 shows the vault board response that occurred when a young male gymnast performed a handspring vault over a vault table. Note that the response of the board indicated an intermediate recoil and a complex wave-like movement of the upper surface of the board that resulted in tipping of the board from side-to-side, as well as a whipping movement of the most forward board marker.

The precision was so great that the gymnast's last few running steps were detected by the sensors due to the deformation of the wooden gymnasium floor as the gymnast approached. Figure 2 shows the sensor configuration.

The magnetic motion tracking system is important due to the issue of the vault safety mat that will be used for Yurchenko-type vaults. Reflective video makers will be obscured by the safety mat making the detection of board motion impossible by traditional video means (Figure 3). 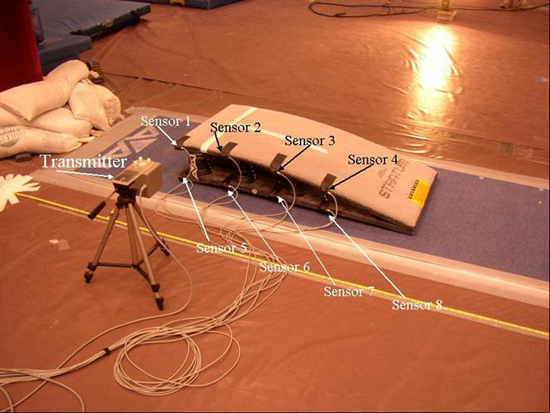 An example of the type of data provided by the magnetic sensors is shown in Figures 4 and 5.

Both figures show screen images of the Advanced Motion Measurement software with the sensor triads depicted along with a graph of the Z direction (up and down) sensor positions for six of the eight sensors. Figure 4 shows the results of a take-off on one type of vault board. 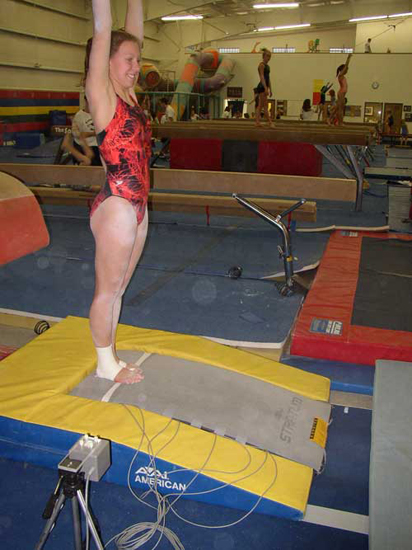 Figure 3: Image with gymnast shows the vault board is shown with the safety mat surrounding the board on three sides. An example of the type of data provided by the magnetic sensors is shown in Figures 4 and 5. Both figures show screen images of the Advanced Motion Measurement software with the sensor triads depicted along with a graph of the Z direction (up and down) sensor positions for six of the eight sensors. Figure 4 shows the results of a take-off on one type of vault board.

Figure 4: Sensor configuration and sensor movement are shown above. The graph shows the movement of sensors 1 through 6. Note that the take-off from this board presented an intermediate recoil that occurred during the initial descent of the magnetic sensors during the initial impact of the gymnast onto the vault board.

Figure 5 shows the movement of the sensors on a different type of vault board. Note that the take-off from this board does not show an intermediate recoil. Figures 4 and 5 were the result of the same athlete performing the same handspring vault. Sensor configuration and movements (see graph) are shown in the Figure 5 screenshot.

This type of take-off is performed after a round off which serves to turn the gymnast 180 degrees from his or her run; thus the athlete is facing backward when contacting the board. 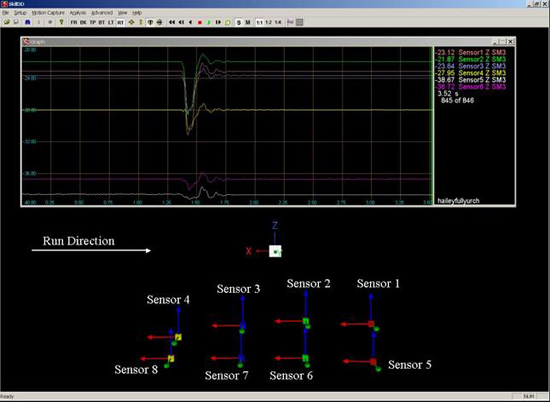 Figure 6. Yurchenko take-off. Note that the vault board movements are more subtle and displacement patterns show that the gymnast's take-off has a more prolonged contact time with the board.

To conclude this initial discussion of vault board behavior, Figures 7 and 8 display the vault board recoil patterns as depicted by the sensors. Note that the recoil movements of the two measured vault boards are quite different for the same type of vault performed by the same gymnast. One of the boards (Figure 7) shows the sensors rising almost directly vertical. Figure 8 shows the sensors rising vertically initially and then move obliquely backward. At present, whether one movement is superior to the other is unknown. 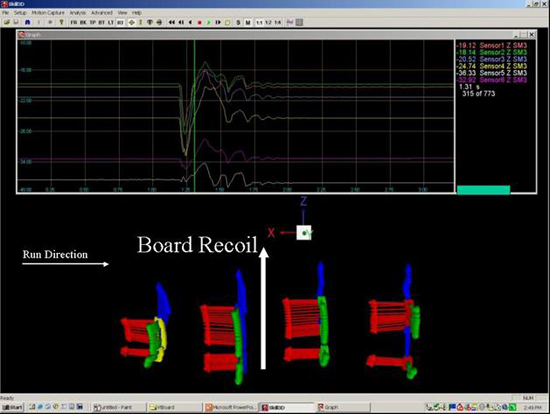 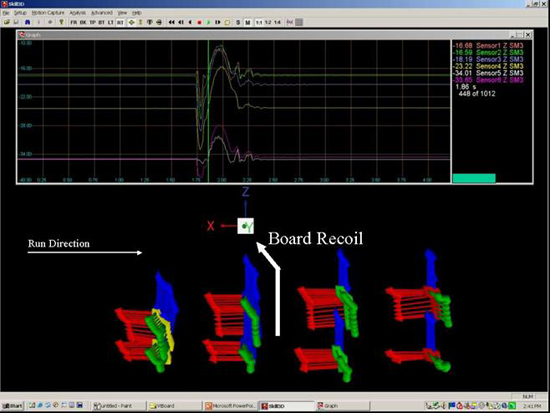 Figure 7. Vertical recoil actions of one type of vault board. Note that the sensors rise almost directly vertical during recoil.

Figure 9 shows the displacement of sensors during a Yurchenko vault take-off in a multi-image format. Note that the forward-end (rightmost) of the board (Sensor 1) is deflecting the farthest and this corresponds to the take-off impact striking the forward end of the board.

This deflection pattern is in marked contrast to the typical type of impact pattern that is observed when gymnasts perform a handspring type vault where board contact occurs nearer the rear or leftmost part of the board (e.g., sensors 3 and 4). 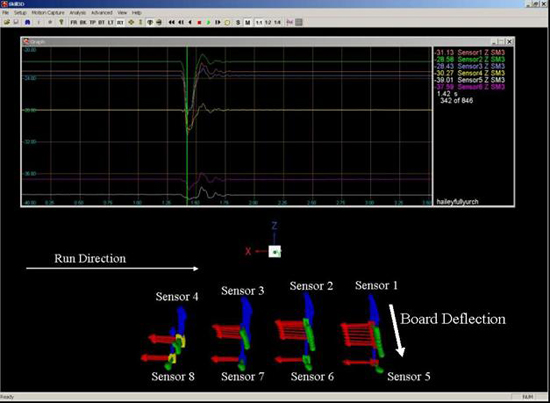 Figure 9: Yurchenko vault, initial impact. Note that Sensor 1 is descending farther and more rapidly than the remaining sensors. This indicates the position of the feet where the gymnast contacted the board.

This preliminary report has shown that the two types of vault boards analyzed thus far behave differently. Moreover, it was shown that individual athletes often have markedly different impact signatures with regard to vault board movements.

In order to determine if these differences in both athlete and vault board behaviors are good or bad, further analyses will be necessary. Moreover, the results indicated that the board actions, gymnasts' impressions of these actions, and resulting take-off actions are often counter-intuitive and may defy conventional coaching wisdom. These analysis techniques will be applied to the floor exercise apparatuses and balance beams. The capabilities of these measurement techniques look very promising. 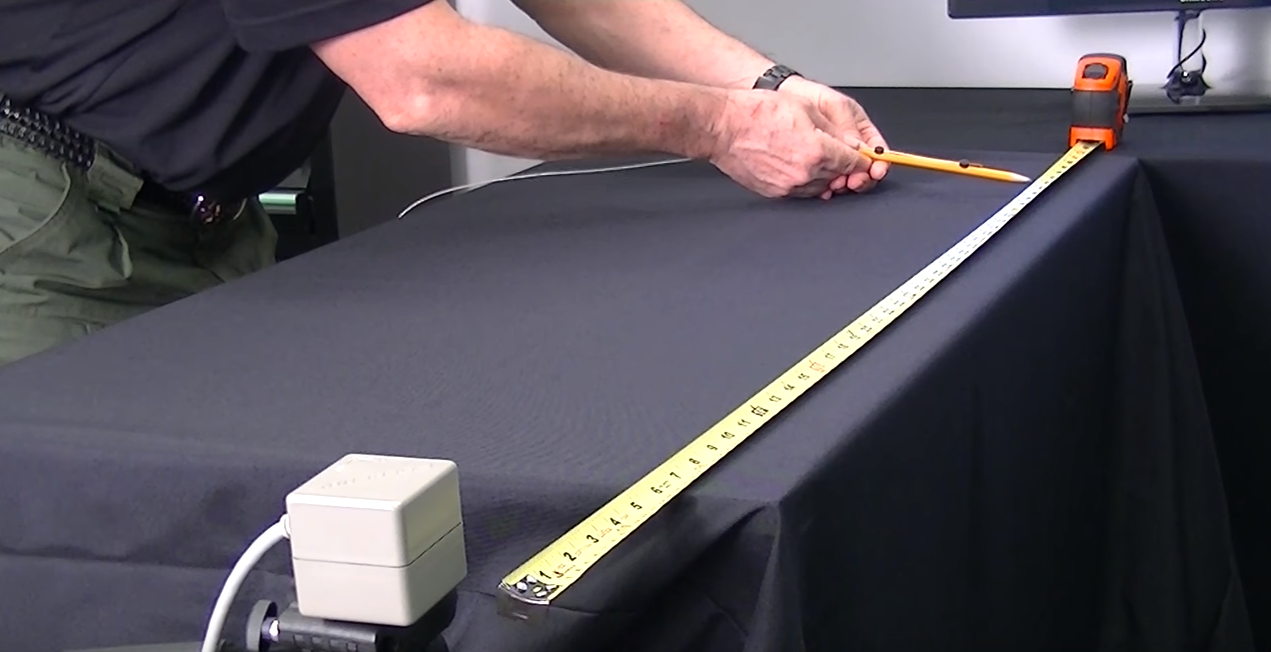