Augmented reality is the use of live video imagery which is digitally processed and "augmented" by the addition of interactive 3D graphic objects. This is achieved by overlaying computer generated graphics, sounds and haptics into real world environments.

LIBERTY LATUS uses wireless markers to track position and orientation of an object. Each self-contained marker is tracked in space by receptors, each of which provide an eight-foot diameter spherical coverage. The system is capable of accommodating up to 12 markers and up to 16 receptors to create large areas of coverage.

Traditionally, special effects are created offline, frame-by-frame, requiring user interaction and computer graphics system rendering. Now with D'FUSION, the software analyzes the live action images to determine the camera parameters and uses this to drive the generation of the virtual graphic objects to be merged. The user holds a wireless tracking marker to specify where the 3D objects need to appear in real time. 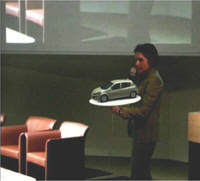 The camera follows the movement of the hand and the result is displayed onto the television screen. Because the marker tracks position and orientation of the "virtual" object, which appears to be in the hand of the user, it can be simulated as if it were a real object.

The wireless technology is a significant enhancement to Total Immersion's AR solution, enabling the user to have complete freedom of movement without the concern of wires (see photo: Virtual 3D image of car prototype).

Total Immersion utilizes this advanced technology in various industries and has most recently been chosen by CBS News to enhance its show 48 Hours. Hosts of the show will use D'FUSION to provide viewers with technical and scientific explanations directly on the set.

An automobile manufacturer used this technology in a large corporate presentation where they introduced a prototype of a new car. Since the car only existed in virtual 3D form, this technology was extremely useful in providing a model of the prototype, including color options.